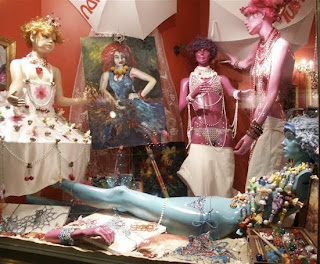 Excited students gather in front of the theatre. Girls with curly red hair, short skirts and coloured panties, wearing boots and lacy underwear, breathe the grey smoke of banished cigarettes into half filled glasses cola and white wine, while talking unstoppable to their male classmates. Some stretch their legs on the stair towards the front door of the renovated 19th century building.

Inside their mates are getting ready for the FIRST show. Virgins on stage. Nervous air leaves nostrils quivering. Palms of hands a little sweaty are rubbed with magnesium to prevent acrobats from falling down from the high ceiling, where ingenious constructions hang for the occasion. Throats are cleared for monologues. Dancers nourish their feet and some secretly kiss one of the toes for good luck. The director walks to and fro, reassuring the performers as well as himself.

Doors open. The eager classmates walk into the room trying to control their youthful movement. Some ‘real public’ enters as well. Lights drop as soon as everybody is seated. One spot shines on a white dress that slowly starts to move. It has no head. A boy jumps out of a trash container, serving white wine in a juice bottle to a lady in a wheelchair with an umbrella attached to it. Another boy tries to peace his mind by seducing a prostitute with a brace in a dark ally. One acrobat wraps herself in transparent plastic and climbs to the ridge in a sensual movement. She falls, the plastic catches her, entangles her as if she were a mummy of modern times. Two girls dance frantically, wrestling with each other and their homosexuality. The public sits down on the ground, surrounding them.

Then people lay their heads down on velvet red cushions. Fifty or more people on their back look in amazement at the black ceiling where a girl flies around a horizontal bar at dazzling speed. Hoola hoops circle synchronically around two bodies. Darts aim at bare toes, just missing. A dancer throws his partner to catch her lovingly before she falls. Muscles crackle. Sweat pours. Bodies bend. He lifts her on his head and carries her away. Far into the Tilburg night where the full moon awakes the night people and urges them to walk the streets with glowing eyes and restless hearts, until dawn breaks for a brand new day on which wedding bells ring, just around the corner where the theatre is located.

The bride’s smile extends her lipstick leaving red stains on her husband to be’s white collar. Best men get lost in the chaotic traffic driving the broken streets of the city, while the wedding rings lay forgotten in a friends car. Their mood untouched by chaos and delay, another odd crowd, existing of farmers, conmen, artists, mothers and businessmen, assembles in the city hall, the theatre of civilians, to witness the birth of yet another experiment: that of eternal love. 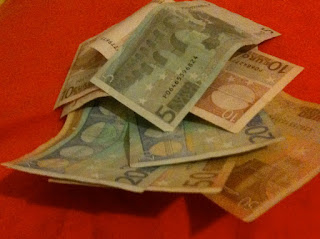 We are sixteen, suppose, we are a group of sixteen. Life is harsh on us. Taking us to the bottom. We barely have enough food. Every night we have to think how to find a dry, safe place to sleep. We need all our creativity to stay alive. That means we are sixteen people trying to survive. But we are deeply connected to each other. Connected by our sour past and our bitter present.

We used to perform together as a group. Our act dates from the old days, when we were trying to survive treacherous streets too. We know where we come from. We don’t know where we are heading.

Suppose we are sixteen. An Opportunity arrives at our used mattresses where we laid our heads. It is too good to be true, for it is kind of unconditional. We shake our sleepy head, toss the muddy sheets and go back to sleep.

Then another Opportunity knocks and rattles the bones of our lean bodies. It is a familiar Opportunity. It speaks the language of our parents and grand parents. This time only nine of us are invited. The rest is oblivious. The nine can earn € 150 each. This is a lot of money for a have-not. So the nine accept in grace and forget about the rest of our group. One has to think about oneself, right?

After some time the nine learn, the familiar Opportunity itself earned € 600,- by just rattling their bones. Their miserable € 150 is spent quickly. Their brothers felt cheated on. Distrust and selfishness take possession of the group. The cohesion and solidarity is crushed into deep earth. The first Opportunity is gone as well, looking for people who deserve unconditional support.

Suppose we were sixteen, trying to survive. By now we are all one. Sixteen times one. And sixteen times losers, because we could not bring ourselves to share. How do you survive by yourself?

She lay on the couch in the living room. A bucket beside her. Her coughs filled the space. The blood and slime from her longs filled the bucket. The complexion of her face turned pale, almost white, in a few minutes. She looked nearly European, except for the frizzy hair, which was covered now with tiny pearls of sweat. Her sister offered tea with honey and we rubbed her chest with mental herbs. ‘It’s the cold,’ she muttered. ‘I get sick from the cold in this country.’

A doctor, we need a doctor. Where do you find one, for an eighteenyear old girl with no papers, no passport and worse, no health insurance? Luckily most doctors in this country still remember why they took the oath.

‘Asthma’, concluded the physician. She will need medicine and I’ll run some more tests. The medicine is quite expensive, I can’t help that. But the tests I can do.

Today Obama’s Health Care Bill passed the conservative blockade. We heard it at the health care centre where the lean African girl was tested. ‘Inhale deep and then blow as hard as you can into this device,’ the doctors’ assistant told her. ‘I am so happy with Obama’s victory. It gave me goose pimples all over! Health care should be available to all people. All over the world.’

The woman energetically moved through her office, like dancing. ‘Blow, blow’, she sang to her patient. ‘Come on, you can do better than this.’ And she laughed. ‘I am glad I could run this test on you. You did really well. The doctor will call you in a short time and discuss the result. I wish you good luck and freedom to live your life as you choose. There is hope.’

We were unsure if she meant the condition of the teenager, the victory of Barack Obama or the mentality of the physician she works for. Maybe, she referred to all three.

It's cold out there - homeless asylum children

This Monday morning De Volkskrant, Dutch national paper, reports on asylum kids who are homeless, due to the way Immigration Services treats them and their parents.

We already knew this at nonfiXe, but now the European Committee for Social Rights knows it too and calls the Dutch government to the stand.

We already knew about homeless kids, out of experience. The most recent experience concerns Afrisinia, Ethiopian youth circus that asked for asylum in the Netherlands almost three years ago. Afrisinia is a group of 16 talented and ambitious young people (five of them underage, eleven youngsters in their twenties) who flew a suppressive regime, that harassed and sexually abused them. They came to find a life in liberty.

The procedure loving, we-can’t-help-it-we-do-our-job civil servants succeeded in frightening the youngsters by threatening to deport them back to the abusive authorities of their home country. For this, the Dutch government has to account too in Europe, at the European Court for Human Rights.

It’s cold out there. 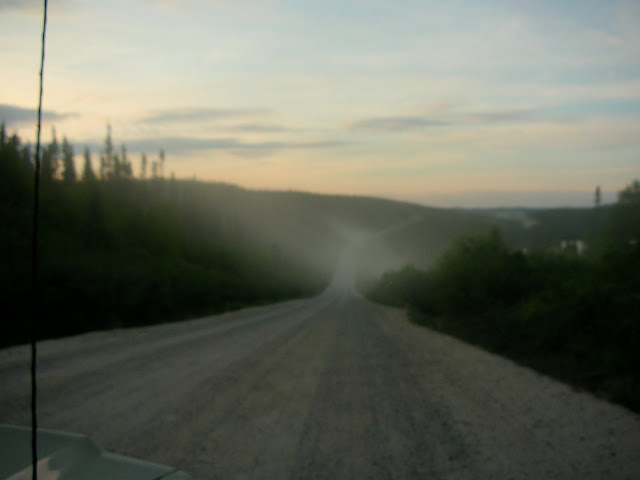 Looking for the core of sustainable development, we stumbled on a new word: ecolution. Ecolution is a agglutination of ecology and evolution. The human race stopped to evolve long ago, according to scientists. But the minds of people did not rest.

Ecolution means evolving in a sustainable direction. Sustainability, in our view at nonfiXe, is an integrated concept that takes the interest of people, planet and profit into account. Not one of the aspects, but all three need to be weighed and included in the solutions we come up with. That way the solutions will be sound.

That is why we opened www.ecolutie.nl. This website wants to contribute to sustainable development by researching and debating dilemma’s, opportunities and possible solutions. We invite you to join and share.
Gepost door Caro Sicking op 04:51 Geen opmerkingen: 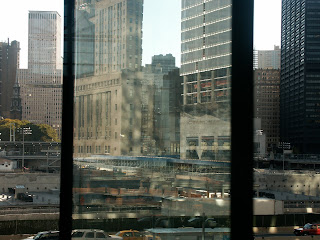 Young artists get together in the Cacao factory in Helmond. It is situated along the Zuid Willemsvaart, a straight waterline where ships loaded their cargo in order to transport materials from one place to another. The old plant is given a new, a cultural, destination, like many former industrial buildings.

We all seem to like these spaces. They give a thrill when you enter the rough high rooms whose purpose has changed. The glorious past of high production, sweating men and oil driven machines lingers on. Cathedrals of capitalism and entrepreneurship, dating from the age when man thought he could conquer nature.

Wonder if the next generation will feel the same grandeur in the offices built nowadays. Why not? A 2010 office does not appeal to the imagination. It is clean and
sterile. No open windows, no dust and dirt. There is no sense of adventure, no piracy. 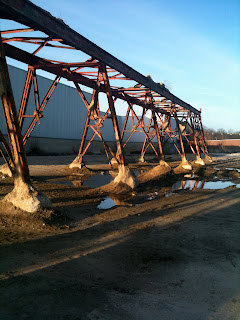 After twenty or thirty years nobody will work in an office anymore. At least not like today: morning exodus by car, nine to five sitting behind a desk in between the other desks, evening retreat by the same car, home at six, diner at six thirty, television, bed. I don't think our kids can be seduced to lead this kind of robot life.

They will work in their houses, with their offspring playing around them. Getting up in the morning and switch on the computer, faces unshaven and bodies not yet showered, but a strong cup of coffee to start the day. First reply all the messages. Then wash up, brush your teeth, walk the dog, practice yoga or jog around the forest and start to work....

What will we do with these office buildings lined up, guarding straight tarmac roads? If we do nothing they will begin to deconstruct, fall apart, ivy growing inside turning the, once perfect white walls, green. 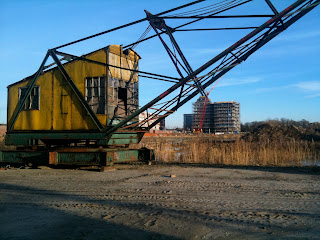 Winds will blow through the broken glass. Then. Then they will attract people again. Then new nomads enter, customize the place for their needs, start to make music, exhibit paintings, give performances.

Then they will no longer breathe the boring, grey, act-normal-wear-a-tie, air.

Today BBC news reports that millions of aid dollars to fight the famine in Ethiopia, 1984-85, actually came into the hands of the TPLF rebels. The men, who now form the dictatorial regime of the country, used the money to buy weapons instead of grains.

The deceit 'arms for aid' still goes on under the reign of dictator Meles, as is claimed by young artists of Circus Ethiopia. The circus poses as NGO to support and educate street children in Addis Ababa. It collects lots of money from Western NGO's and governments, money that disappears in the deep pockets of TPLF officials, while young people are being abused, raped and put to slavery.

More on Circus Ethiopia at www.nonfixe.nl
The article by Martin Plaut is published at BBC news: http://news.bbc.co.uk/2/hi/africa/8535189.stm