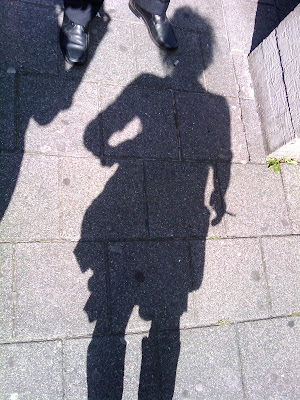 Public awareness can change laws and beat ignorance.
The ignorance of civil servants, police and clients or arbitrarily bystanders keeps trafficked women in their ghastly prisons. And if they manage to escape, they find no support, no protection, due to insufficient laws. It takes years before they are acknowledged and offered the very least: legal residence.

The good news is: Human trafficking is attracting more attention in the Netherlands lately. Journey Den Haag devoted a photo-exhibition to the problem, documentaries are broadcasted on national television, newspapers publish the appalling stories of the women, girls, and increasingly, men and boys, who have become victim.

But more is needed: the root of this (and many other) evil is in the extreme poverty of millions of people. We have to fight poverty to fight abuse.


Back in 2001, on February the 26th, Nogi Imoukhuede, Women’s Right Watch Nigeria, wrote me an email:

‘Nigeria is a country with a population of 110 million and 40% of the population are poor while some statistics have shown that up to 70% of Nigerians are affected by the scourge of poverty in one form or the other.
Due to this excruciating poverty and high unemployment levels the illegal trafficking in women and girls began to thrive in Nigeria. Countries in Europe being the usual destination most especially Italy. Our President stated recently that trafficking in women is the third largest illegal business ranking after drugs and gunrunning. Trafficking in Women has created immense wealth for the traffickers and death, sickness, misery and all sorts of dangers for the victims.
The victims are usually lured from their homes in the villages where they are told of job opportunities in Europe. As soon as the victims assent to travelling they become slaves to the traffickers. They are then transported to Europe, all their travel documents seized from them and forced to go into prostitution. In Italy, the victims often sign a bond with their sponsors to serve them for about 3 years after paying back a debt of approximately $100,000 for being brought to Italy. They are detained in hotels and are not free to move about. They are often beaten if they refuse to co-operate and sometimes killed.
The shock of their situation is very traumatic for a lot of girls. We have received reports of some losing their minds and being kept in institutions. Some have been killed by their patrons and we have also received reports of bestialities. Some become HIV positive. The girls become free after paying back the money demanded by their sponsors. If they do not pay, the sponsors send their agents to terrorize their families back home. Once the girls become free they send thousands of dollars back home to their parents who now become extremely wealthy. They build new houses and ride flashy cars and don't want to know where the money is coming from.
When the women are deported to Nigeria they come with only the dresses on their back and are escorted under tight security back to Nigeria. The Nigerian Police authorities have complained that they only receive about 3 days notice from the Italian authorities before these girls are returned.
On their return they become a public spectacle. They are paraded as prostitutes and detained in the police station before they are compulsorily tested for HIV/AIDS. Thereafter they are released to their state governments.
Our interaction with these girls show that they have undergone a character change because of the terrible things they have been forced to do. Some become extremely withdrawn and feel that they are failures. Their family members are also not happy with them because instead of bringing back wealth in dollars they have brought shame. Our records reveal that 1180 trafficked Nigerian women were deported between March 1999 and December 2000, mainly from Italy.
The Nigerian Government has not issued a rehabilitation programme for these women and girls some who are as young as 13 years.
However, women NGO groups have embarked on sensitising the public about the real motive behind trafficking in women. A bill has been presented to the National assembly to criminalise trafficking in women and children.’

Not much has changed for trafficked girls in almost 10 years. Except maybe for one thing: public awareness of human trafficking is rising…

While reaching out to the trafficked, let’s not forget: to kill the beast of slavery, trafficking and abuse, we have to kill the beast of poverty. We can do so by sharing the earth's sources, innovate on decentral clean energy production, empowerment, education and health care. We can do so by resisting oppressive regimes and racist populists.
We have to fight injustice to fight poverty. And: We have to fight poverty to fight abuse.

You can read the whole article of Human Right Watch:
http://www.hrw.org/en/news/2010/08/26/c-te-d-ivoirenigeria-combat-trafficking-prostitution
The stories of Hope Johnsson and Gloria, both trafficked to the Netherlands: www.nonfixe.nl (in Dutch)
‘Elena’s story’ www.journeydenhaag.nl

Nogi Imoukhuede was one of the human right activists who prevented Safiya Hussaini in Nigeria from being stoned. A Sharia court sentenced her to death, because Safiya was pregnant outside marriage. Her advocates collected support from people all over the world through the Internet. Their political representatives followed duly, turning Safiya’s death penalty into an international issue. Safiya survived. Thanks to rising public awareness.